Interview – David A. Of Southern California.

Have you ever wished you could do something to make a difference in the life of someone else? If so, you’re not alone. In fact, the desire to make our lives and experiences count for something greater than mere existence is fundamental to the human condition.

But you don’t need to rush into a burning building or cure cancer to make a difference in the lives of others. Though those two acts certainly fit the bill, sometimes simply sharing our experiences can have a positive impact on others dealing with the same issue.

That’s the reason behind our Interviews segment and why we hope to make it a monthly feature.

We want to give people like you—people who have been dealing with Tinea Versicolor for some time—the opportunity to share your experience with those who might be at the beginning of their battle, or with those who simply wish to gain more insight into this persistent skin disorder.

This month we’re featuring an interview with David A., a 46-year old resident of Southern California who has been living with Tinea Versicolor (TV) since the age of sixteen. His experience with TV spans 30 years and should provide a light of hope to those of you unsure of what a future with TV looks like.

TV.net: Thanks for agreeing to share your experience with Tinea Versicolor, David. Maybe you can start by giving us a little background on you…where you live…what you do for a living.

David: Sure. I currently live in Southern California, specifically in Redlands, a suburb an hour east of Los Angeles on I-10. As for work, I’ve had a lot of different jobs. (Laughs) Down in Mexico they would call me “a man of a thousand uses.” Right now, though…I make my living as a freelance writer. Actually, in all fairness to myself, many of the odd jobs I’ve done have been to that end…to support my writing.

David: No and no. Maybe one day, God willing. Right now, though (more laughs) women tend to be drawn to the writer part, just not the poor and struggling part. Say…can you spare some change? Kidding. I’m good.

TV.net: Living with TV doesn’t seem to have harmed your sense of humor any.

David: Oh, I have my days. I’m the creative-neurotic type, after all. But a sense of humor and faith in a higher power are the only two coping mechanisms that seem to work for me. In case you haven’t noticed, this world can be cruel at times. Laughter and faith serve as my armor, I guess.

TV.net: Speaking of body armor, when and how do you think you contracted Tinea Versicolor?

David: That’s an interesting story. It’s all conjecture, of course, but it’s my theory on what happened. When I was a teenager, I did a lot of surfing. We lived inland by about an hour-and-a-half, but my best friend Mike and I would cut school regularly and drive to the beach. (Laughs) Getting our driver’s licenses really hurt our education. Anyway, one summer we decided to take a “surfari” from K38s (KM marker) in Mexico all the way up to Steamer Lane near Santa Cruz…in Northern California. Truthfully, I sucked at surfing and did it mostly for my love of girls, sun, and the water…in that order. We had a blast. Well, when we got to Cardiff just north of San Diego, there was a huge sewage spill and the beach was closed. But the surf was up and that was tempting everybody on shore. And did I mention there were girls nearby…cute girls? Yeah…we did. We paddled out in the sewage spill, as disgusting as it was…and it was disgusting! The water was this coffee-colored brown and we were duck-diving through the putrid waves. I still remember…all to look cool for the girls. The rest is history, I guess. A month later these brownish-red spots appeared all over my chest, back, and neck. Maybe it was all a coincidence; maybe not. But that’s where and how I think I caught it.

TV.net: You’re right: That is disgusting. How was the diagnosis made?

David: The doctor ran a special black light over my skin in a darkened room and my whole torso turned fluorescent green. It was crazy. I really thought I was goner.

TV.net: So that was when you were sixteen? That must have made high school a challenge. Any of the other high school kids comment on your spots?

David: Yeah…it really blew, if you want to know the truth. Though I can laugh things off in public, my skin…if you’ll pardon the pun…is actually quite thin. Living in Southern California, I spent most of my free time outside in the sun. Even to this day I would rather be in the heat than cold…active under a hot sun than resting inside. Back then my skin was really dark and tan. Even now it is. But after contracting TV, I looked like a leper…at least, that’s what people started calling me. It hurt. I got to where I wouldn’t take my shirt off anymore, even on 100 plus degree days at the pool. The worse part came from my so-called friends, though. They called me everything from spot, to leper, to albi…short for albino…to diseased. I don’t think I had one friend that stuck up for me.

TV.net: Do you think it was fear?

David: Them afraid, you mean? Yeah. They wouldn’t touch my clothes, towel, anything. If they brushed against me, someone usually made a joke that their arm would soon fall off or something. Needless to say, I began to withdraw and began developing trust issues.

TV.net: So you’ve had TV for about 30 years? Is it any better today than in your teenage years?

David: Definitely. Between 16 and about 26 years of age…that was the worst time for me. I guess my skin was oilier then. I don’t know. Maybe I just wasn’t disciplined enough to manage it very well. As you probably know, TV requires proactive measures if you don’t want to look like a leopard come summer.

TV.net: What types of treatment have you tried? Which have worked and which haven’t?

David: Well, for the longest time, the only thing really known to treat TV was selenium sulfide, the active ingredient in Selsun Blue Shampoo. That’s what I used all the way up until recently…when I contacted Tony at Tinea-Versicolor.net and he turned me on to Lamisil AT Spray. It wasn’t that selenium sulfide stopped working. It’s still quite effective at treating my TV. The problem is that I’m not married and have no kids, so I don’t have anybody to spread the shampoo on my back where the TV is hardest to reach. Once I learned that Lamisil works and comes in a spray, I tried it. I’m not pushing any products here and get no commission, but it’s the only product I can spray on my back to kill active TV. That’s what I use now, though I still use the Selsun Blue shampoo on my neck and chest from time to time. I don’t want the bottle to go to waste.

David: Wow. Like most people with Tinea Versicolor, I’ve tried my own remedies, as well as other over-the-counter recommendations. The one I would say that was the biggest waste of money, at least for me, was Tenactin spray. I will say that when I ran while using Tenactin, it kept down any flare ups…which are common when hot and sweaty. But it didn’t kill the active TV. It just kept it from going viral on me…for lack of a better word.

TV.net: So you live an active lifestyle still? 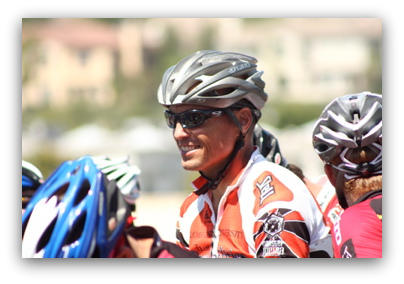 David: Absolutely. TV is not a good reason to stay inside and gain weight. I’ve learned to manage my TV a lot better in old age. (Laughs) Now I’m a wise old fool rather than just a fool. But yeah, I’m very active, especially outdoors. I still love being under the sun. I’m a competitive cyclist and spend a lot of time trail running as well. God painted some beautiful landscape. TV might be inconvenient, but I’ve never seen it as a reason not to get out and enjoy God’s creation.

TV.net: Just one more question and I’ll let you go. How do you manage your Tinea?

David: Well, I’m good about some things, not so good about others. For me, the most important seasons are winter and spring. If I’m diligent in treating my TV during those months, I will be able to enjoy what I call a “spotless summer.” If I’m not diligent, then I have to deal with itchy TV during the summer months when I’m most active…when I like to remove my shirt and tan. By simply applying Selsun once a week during winter and spring, or by spraying the Lamisil once a week, I can keep the TV under control so that it’s unnoticeable. If I procrastinate, which happens to us creative types (laughs) regularly, then it will spread and I go into defensive mode, using the Selsun or Lamisil daily for a week, then returning to the once a week regimen. The thing about Tinea Versicolor is that if you give it a chance to root itself, it will take control and cause you problems. If you stay on top of it, the TV is reduced to a mild inconvenience.

TV.net: Just a follow-up to the last question: What things are you not good at when managing tinea?

David: Ha! At the risk of sounding sexist…I’m not as diligent at doing my laundry as I should be. I’m a guy, after all. When you have TV, particularly when you have an active flare-up, you really should be washing bed sheets and clothing daily…not throwing them in the hamper until later or sleeping on them for a week or two. I suck at that, if you must know the truth. (Laughs) Now you know why I’m still single. I do my laundry like everybody else, but I’d rather be writing or outside… getting my clothes dirty.

TV.net: Thanks for sharing your story.

David: A pleasure. Hope it helps.
i
i
i
If you’d like to be featured in our interview segment, drop us a line: tony@Tinea-Versicolor.net We’d love to meet you and know your story!